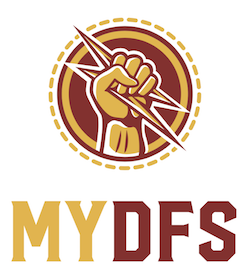 MyDFS is a project headed by Viktor Mangazeev. Viktor previous project was UTrener which daily fantaspy sports app targeting the Russian market. MyDFS uses blockchain technology and smart contracts to increase transparency in the daily fantasy sports industry. Their tokens will be used to collect entry fees and make payments to users who have won. Fantasy sports is a multibillion dollar a year industry.

The product which according to the Road Map will be released in May. The App will be available on Android and iOS along with a web version. While we are not fans of companies holding an ICO without a product, we are confident that they will release a product. Our confidence is based on the fact that Viktor Mangazeev has released a similar product before. So they are not new to developing the app or the industry.

MyDFS will offer matchups in European soccer, American Football, Basketball, and Cricket. One of their interesting features is the ability to bet on the users playing, So if you play fantasy sports and have been unsuccessful you can bet on a successful player instead of building your own team.

There are 11 team members and 6 advisors on this project. MyDFS is headed up by Viktor Mangazeev, who previous started UTrener and KHL. The CTO (Chief Technical Officer) is Sergey Sheypak. Sergey previously worked at telecom giant Megafon, he is also a certified Hadoop and Teradata developer. The advisors on this ICO are Yobie Benjamin and Frank Kan Fu. Yobie is the CTO of DragonCoin and Frank is a managing Director at Meitu

There are 125 million tokens being issued with only 50 million being available during the presale. The winners of the tourneys will be paid out in tokens and to enter into the daily fantasy matchups. The tokens can also be used by members to stake a professional play and take a percentage of the winnings. Basically, the tokens will be used for every aspect of daily fantasy sports on their platform.

MyDFS is looking to bring more transparency to an industry that was already in trouble for what was basically using inside information to enrich themselves and get an edge in tournaments. They are also allowing for a different way of participating in daily fantasy sports for users, so instead the users creating their own team they basically pick a professional to win an if they win they will get a portion of the proceeds with the professional also being compensated. I think that will help attract people who want to play in fantasy tournaments but haven’t been successful or don’t have the time to do research on matchups. The industry is growing, while maybe not as fast as it was the last couple years, It is still growing.

Another issue is the tokens, people want simplicity and having to purchase tokens in order to enter a tourney will discourage some people and when your first starting out, you really don’t want to discourage anyone from using your products or service.

Our last concern with the tokens is how the fluctuation of the token will impact demand and operations. For example if their token is valued at $1 usd and they have a guaranteed pay out of $1 million dollars they would need pay our 1 million tokens, not if that value of the token fell to .50 cents now they have to double their token payout or if they set a tournament payout at 1 million tokens and now those tokens fall in value, that may reduce demand for the tournament.

The MyDFS is an ICO launched by Viktor Mangazeev who has experience in the daily fantasy space. If anyone has the ability to succeed in the space its Viktor. However as we outlined in our concern section, they will have to overcome a couple huge issues including the ability to attract enough people to make the service viable. If they do attract enough players then we believe our other concerns such as demand for the coin and getting professional players on their network easier to overcome or they become non issues. This will definitely be an ICO that I will keep an eye on both from an potential investor and as a daily fantasy sports player.